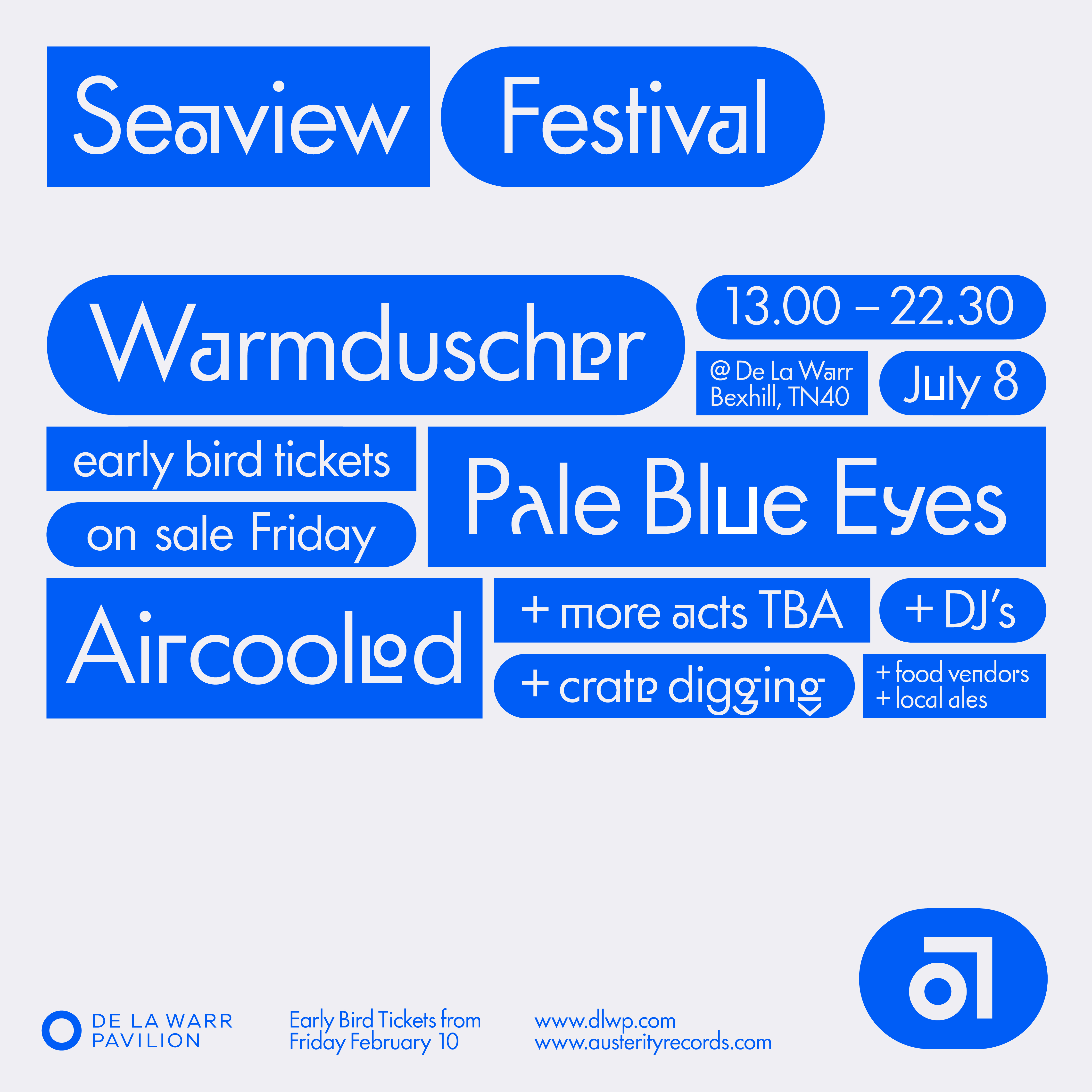 All of us here at AUS are proud to present to you SEAVIEW FESTIVAL - a new summer alt-music fest at the heart of the South Coast.

Taking place on the beach-side plaza of the beautiful De La Warr Pavilion in Bexhill on 08th July 2023, Seaview features a day of live performances from iconic artists & acclaimed up-&-coming acts - with the first wave of artists including Warmduscher, Pale Blue Eyes & Aircooled (+ many more to be announced!).

Early Bird tickets, available for the bargain price of only £32.50pp, will be available from the DLWP box office HERE from 10am Friday (10/02).

In the meantime, please follow Seaview on the following social channels to keep up to date with announcements, exclusives & more. 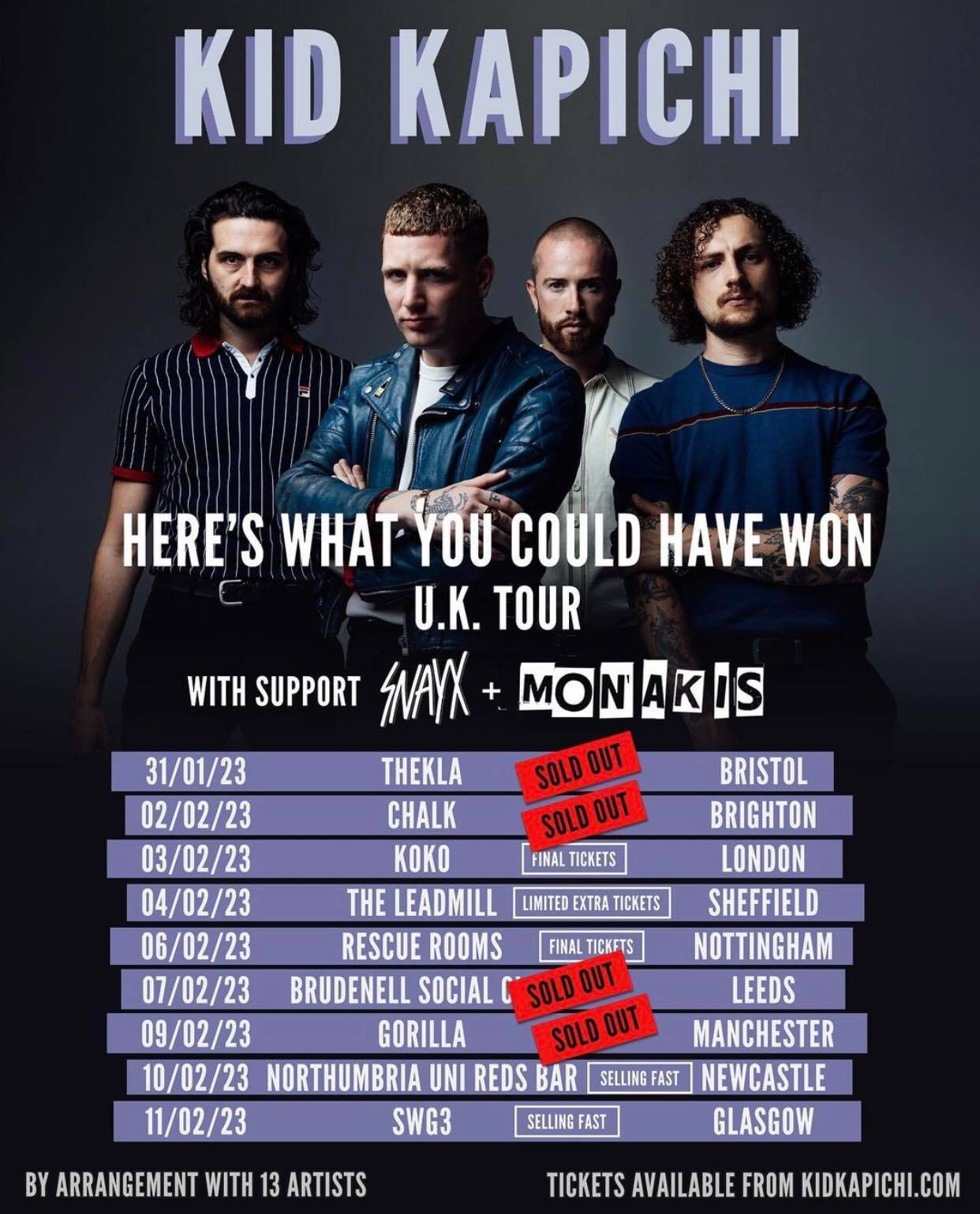 The tour of the year kicks off today as south coast legends Kid Kapichi & our very own SNAYX head out on the road for their massive run of UK & EU live dates.

To all remaining areas - you better fix up quick-sharp & grab your tickets, you don't wanna be the dope that misses this...

Tickets for all dates available via the Kid Kapichi website HERE. 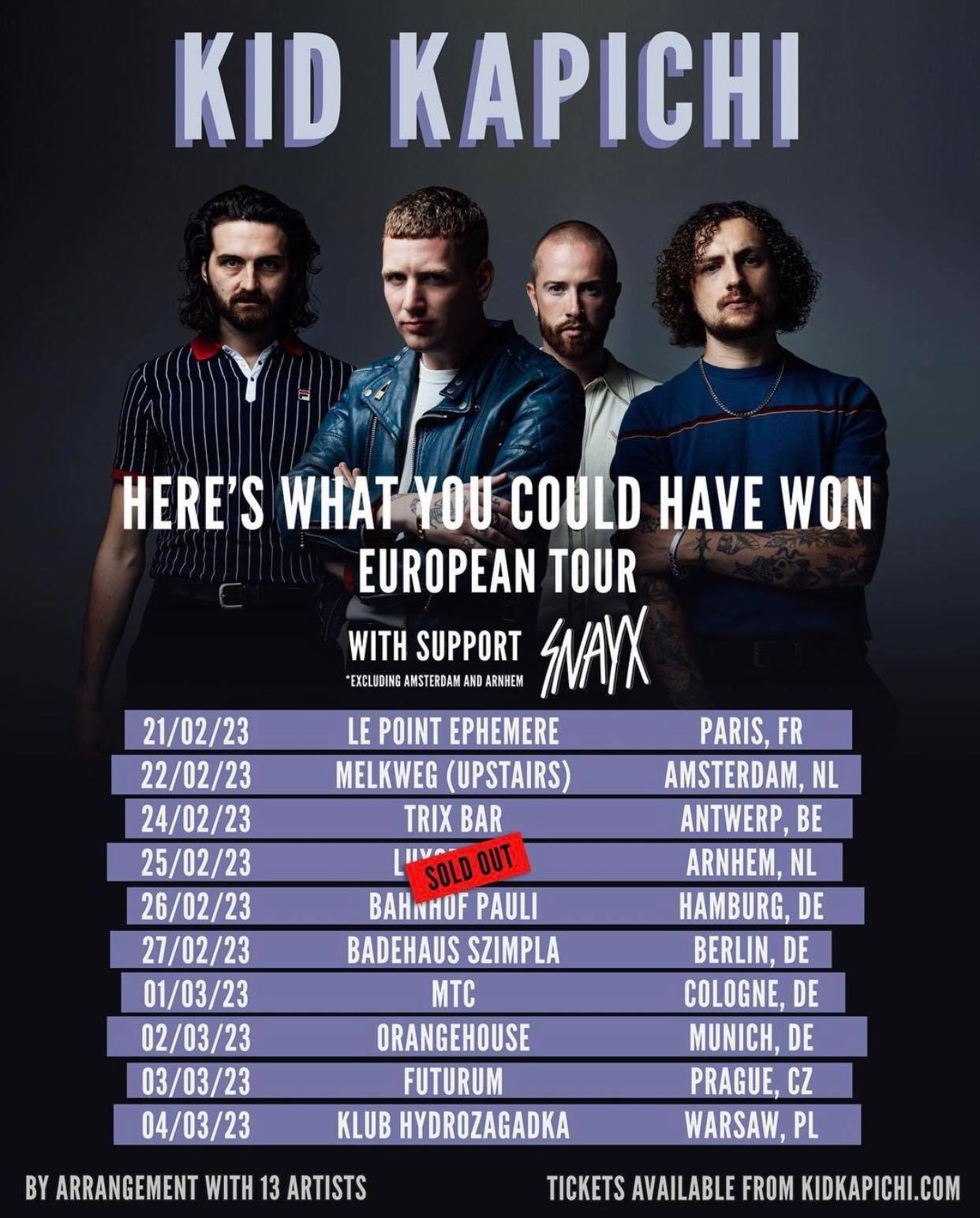 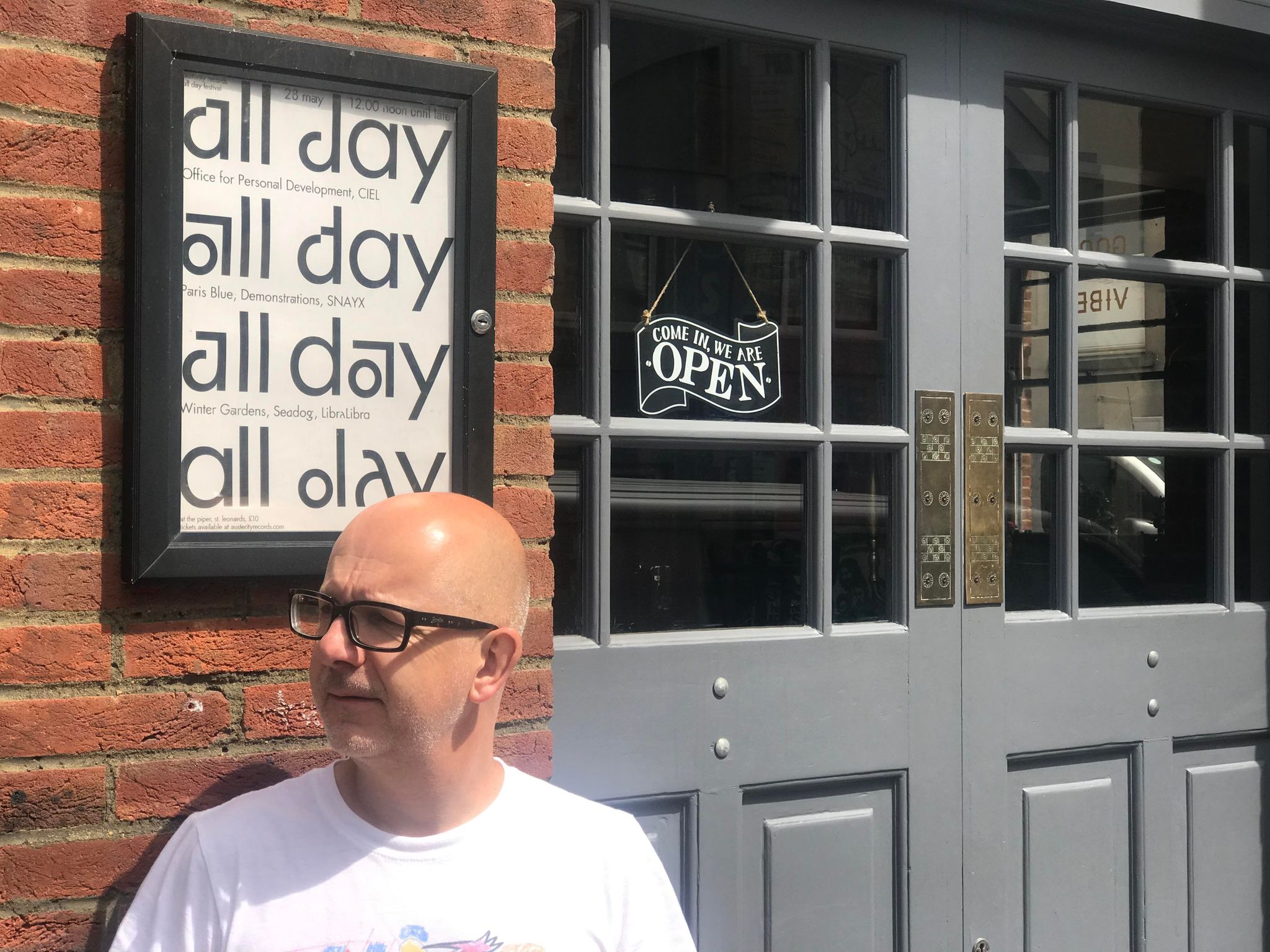 "We decided that we would take the bull by the horns & do it ourselves..."

The latest edition of the Carnival of Oddities' "Band Bible" newsletter has just dropped & features none other than our man Garry!

Gaz talks about how AUS got started, the challenges the music industry faces in 2023 & a whole bunch more.

Cheers to Lindsey Teske & her team for this one! 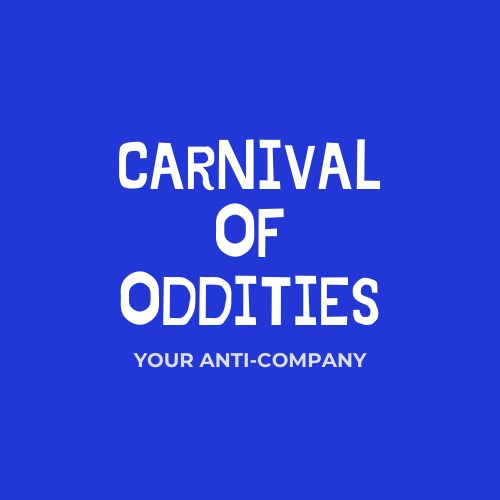 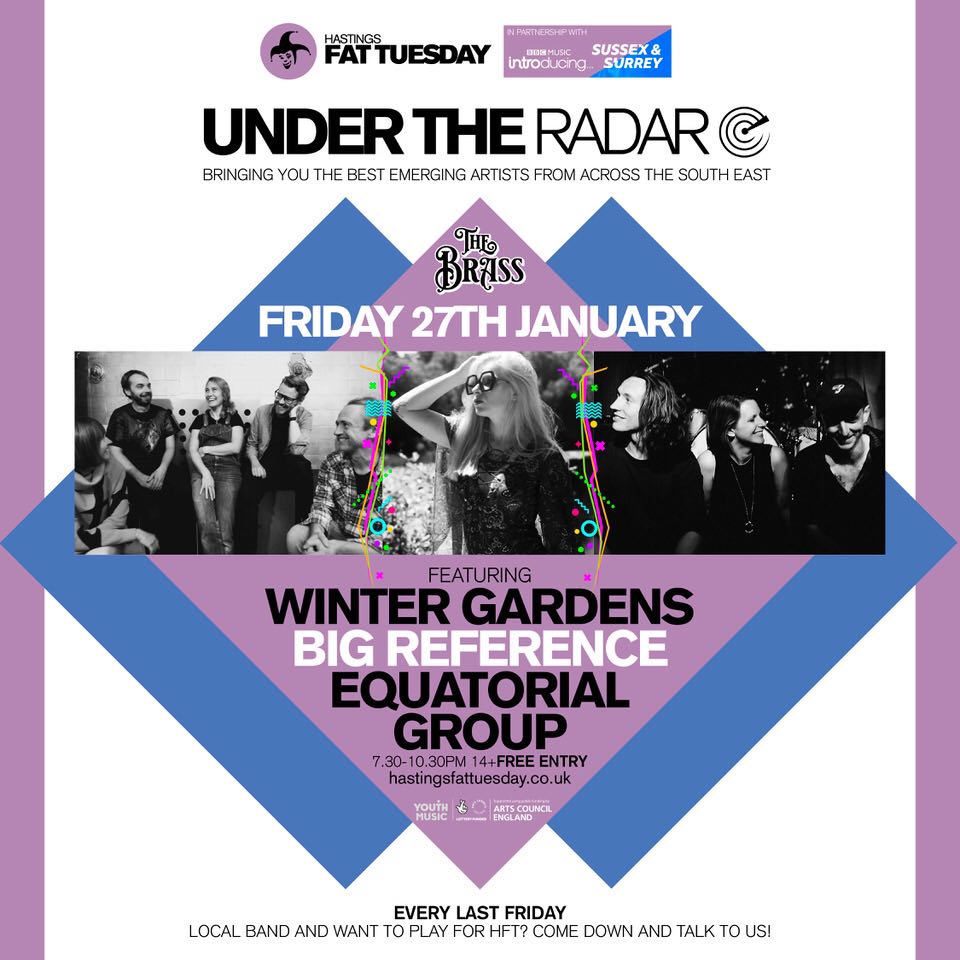 The fine folks over at Hastings Fat Tuesday, the biggest UK Mardi Gras celebration, are bringing you an AUS double-bill over the next few weeks at The Brass venue on Havelock Road.

First off, the new-look Winter Gardens play the 'Under the Radar' BBC Introducing showcase event next Friday (Jan 27th) alongside The Equatorial Group & Big Reference.

The Office for Personal Development follow this up with a special live presentation as part of the main festival with Buddha Triangle on Feb 18th.

Both shows are FREE ENTRY.

Both nights are expected to be super busy, so get organised & come celebrate Fat Tuesday with austerity records! 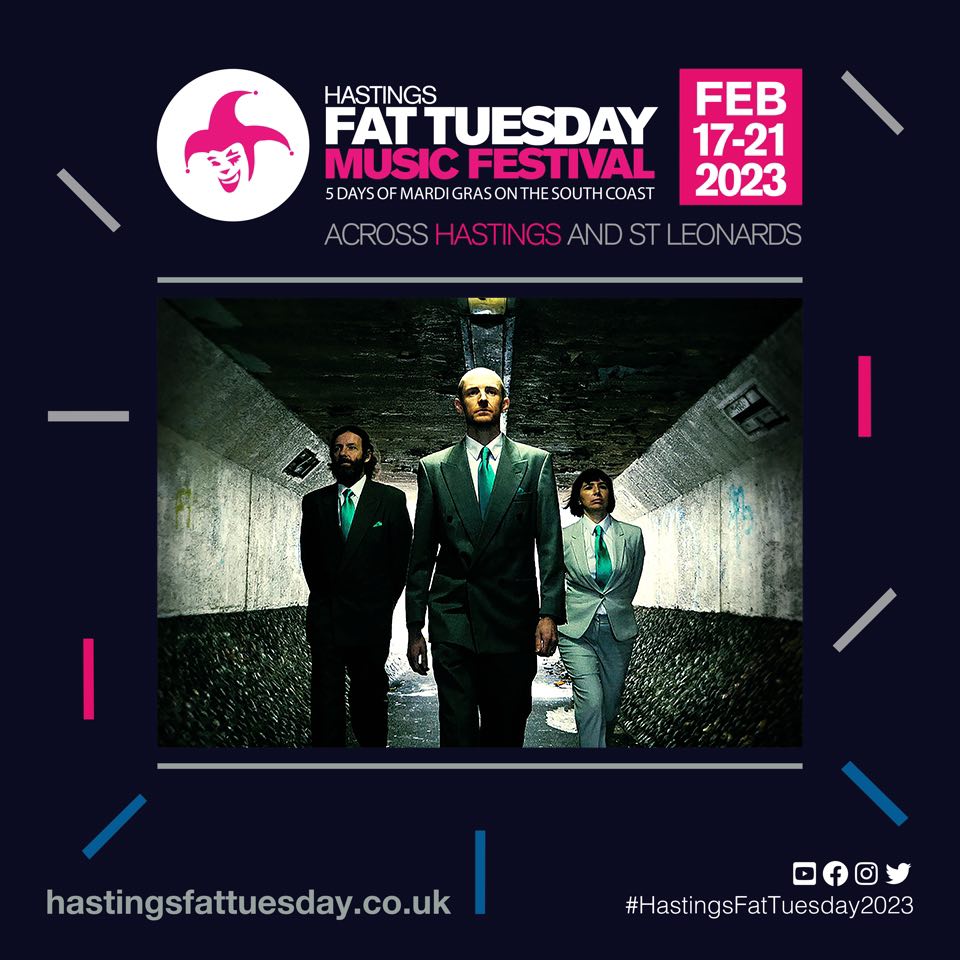 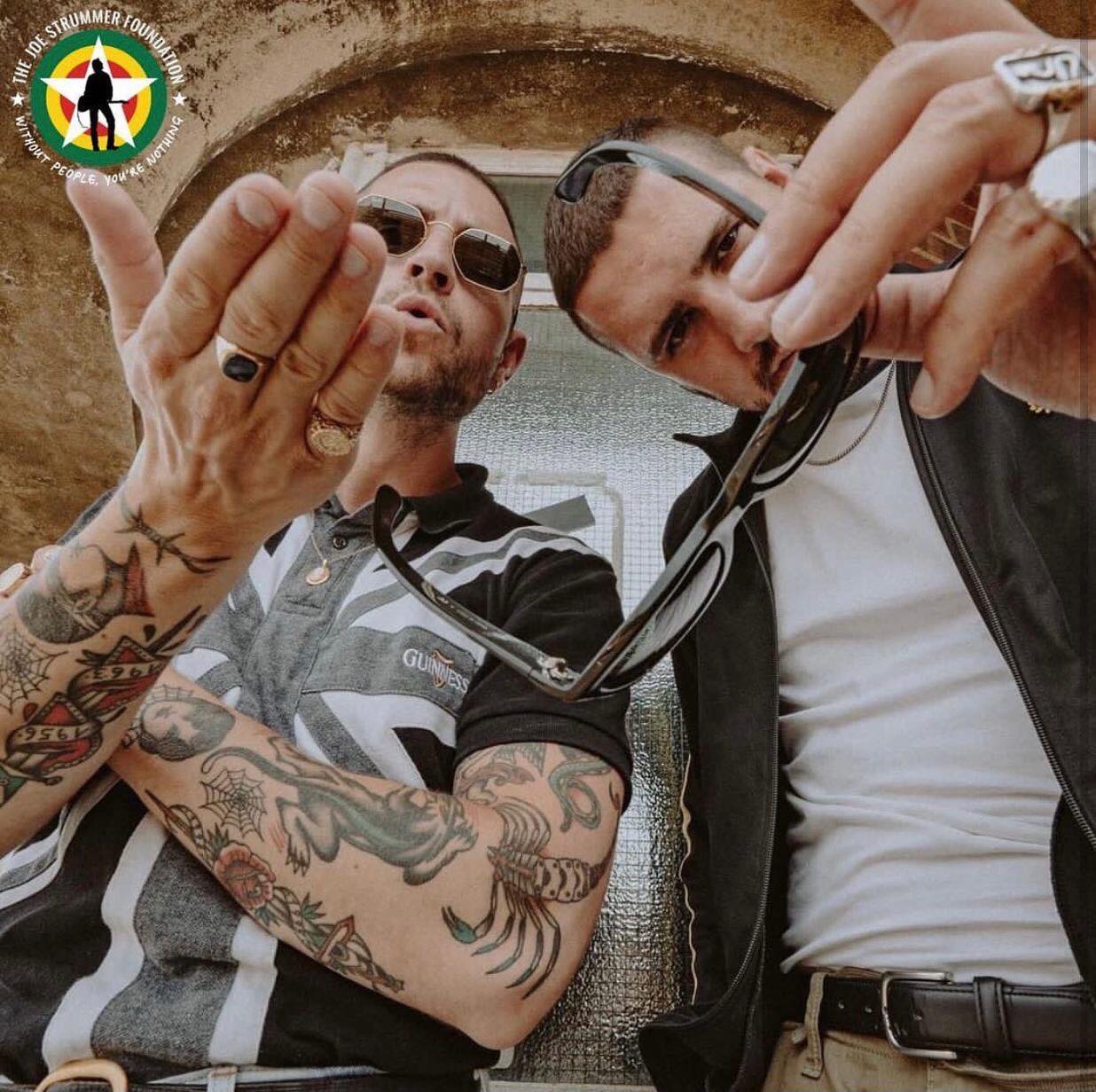 We're proud to share that SNAYX are the Joe Strummer Foundation's featured artist of the month for January. Check out the lads' profile & the new JSF mixtape HERE.

The limited edition "Weaponized Youth" hyper-pink vinyl is on its way to selling out - grab one at the webstore now! 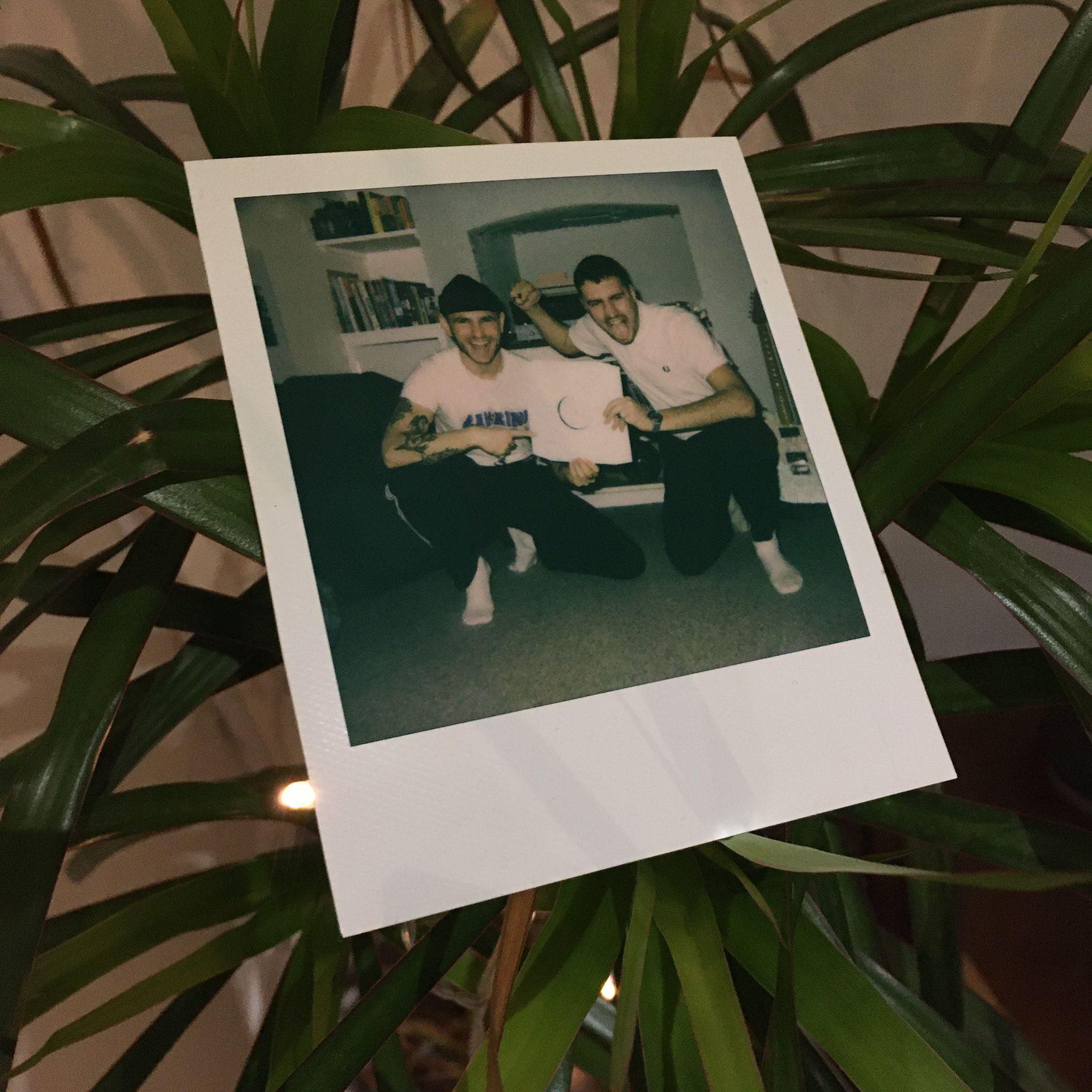 Of course you do!

Head over to the Belly Crawlerz Social Club on Facebook HERE to see how you can enter to win this one-of-a-kind piece of UK punk history, courtesy of austerity records. 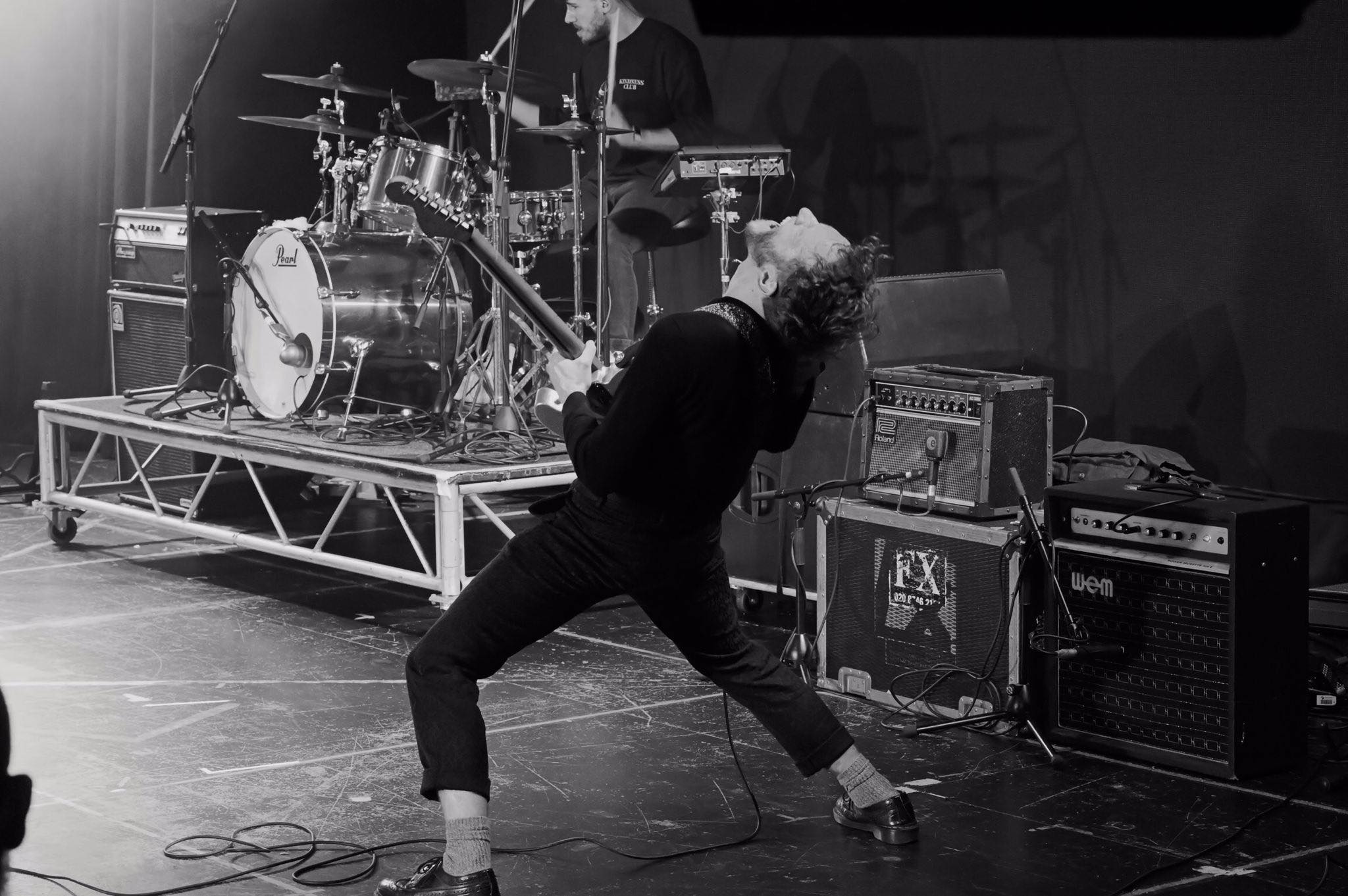 We’re now into the seventh year of this fantastic boutique festival down in Bognor Regis &, as has been the case for the previous six editions, 2023 was an absolute belter.

Thanks to all that made the weekend so incredible, from Jude & her Butlin’s team that treated us so well to all the artists we enjoyed & the friendly new faces we had a beer & a chat with.

Immaculate vibes all round!

“For those unaware, Panda Bear & Sonic Boom are Animal Collective’s Noah Lennox & Peter Kember of Spacemen 3 fame, who just before Christmas released their first collaboration “Reset” (which, I may add, is a stunning piece of work & one of my albums of ’22). Complex tunes with many layers & samples, how was this incredible album going to sound live? Well, I needn’t worried. Stunning from start to finish, the duo's set was an absolute rollercoaster of soundscapes matched perfectly with dream-inspiring visuals. An unforgettable set & one of the best witnessed at Rockaway to date.” – Garry

“W.H. Lung played the REDS stage on the Friday night & was a band I had very much been looking forward to, having missed seeing them live previously in Brighton. I had high expectations & was definitely not disappointed. Perfect delivery & incredible musicianship, track highlights for me were “Inspiration!” & “Showstopper”. I certainly won’t be leaving it as long before I see them live again - a very memorable Rockaway moment.” – Garry

“Rebecca Lucy Taylor is somewhat of a rarity. To be able to create such compositions of epic-pop proportions & then flawlessly glue them together with one of the most captivating live sets is something almost unworldly. Musicianship that brings the songs into their own right in a live setting complimented by an ensemble of choreography & layered harmonies from three very talented backing singers/dancers, this performance was modest with an underlying sense of humour that almost makes you feel guilty for being a man. Bravo!” – Jim

“Having previously played Rockaway Beach in 2019 as a four-piece, our very own Winter Gardens returned this year with a revised line-up & a highly energised new set. Although very close to my heart, this was my first opportunity to see the new line-up live. I had high expectations to hear songs I have grown to love being performed live once again, & performed they were! The harmonies introduced by new backing vocalist Jasmine were absolutely beautiful & fit in seamlessly with a scintillating, high-energy performance that delivered without fault. As expected, the new-look Winter Gardens were a highlight of the entire festival.” – Garry

“Again a band I had been meaning to see for some time, SCALPING hit the REDS stage on the Saturday night & blew me away – literally. Ear plugs firmly inserted, I could feel the immense energy from start to finish. Featuring a wall of (very controlled) sound pounding the body with such intensity I feared for my internal organs, the SCALPING set was not only intense but mesmerising without let-up.” – Garry

“Still reeling from the Winter Gardens set on Saturday afternoon, I was ready for more of the same & Personal Trainer, the seven-piece indie-poppers from Amsterdam, did not let me down. The energy was electrifying! A heady mix of guitar, synth & brass performed to perfection, PT smashed through a cracking back catalogue while delivering a very accomplished set.” – Garry

See you all next year! 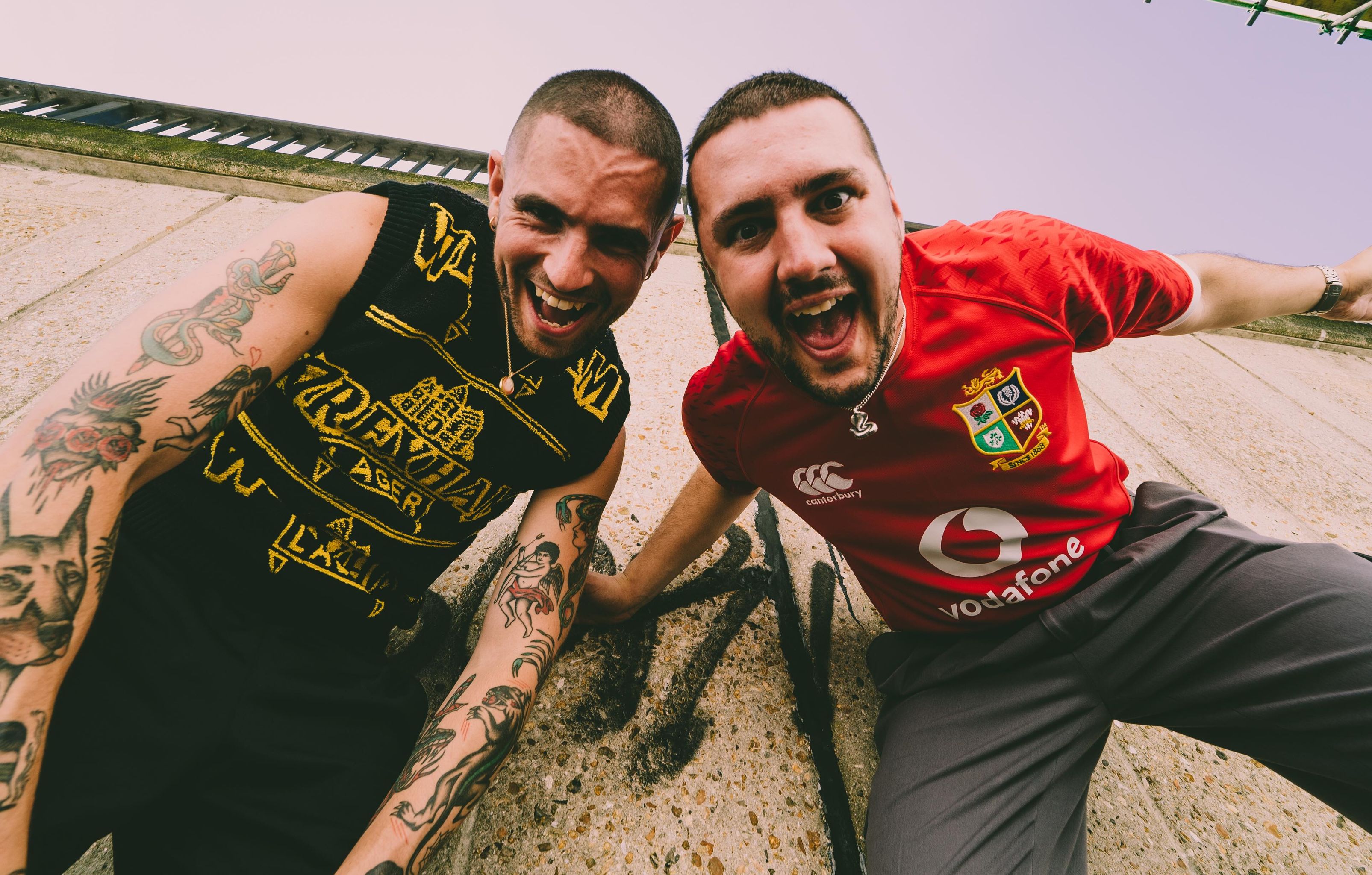 This is the big one, young serpents.

SNAYX have kicked off the year in style by announcing the "Weaponized Youth: Part 1" EP, to be released exclusively via austerity records on March 10th.

Anyone who truly has their finger on the pulse of the UK music scene know how major this is.

Make sure to pre-save the EP HERE to get it in your digital library as soon as it drops!

Pre-orders for the transluscent hyper-pink vinyl have just launched over on the webstore too (order HERE) &, as expected, are already selling fast.

We highly recommend securing your copy now - these won't hang around long...

Don't sleep on SNAYX. Come & be a part of history. 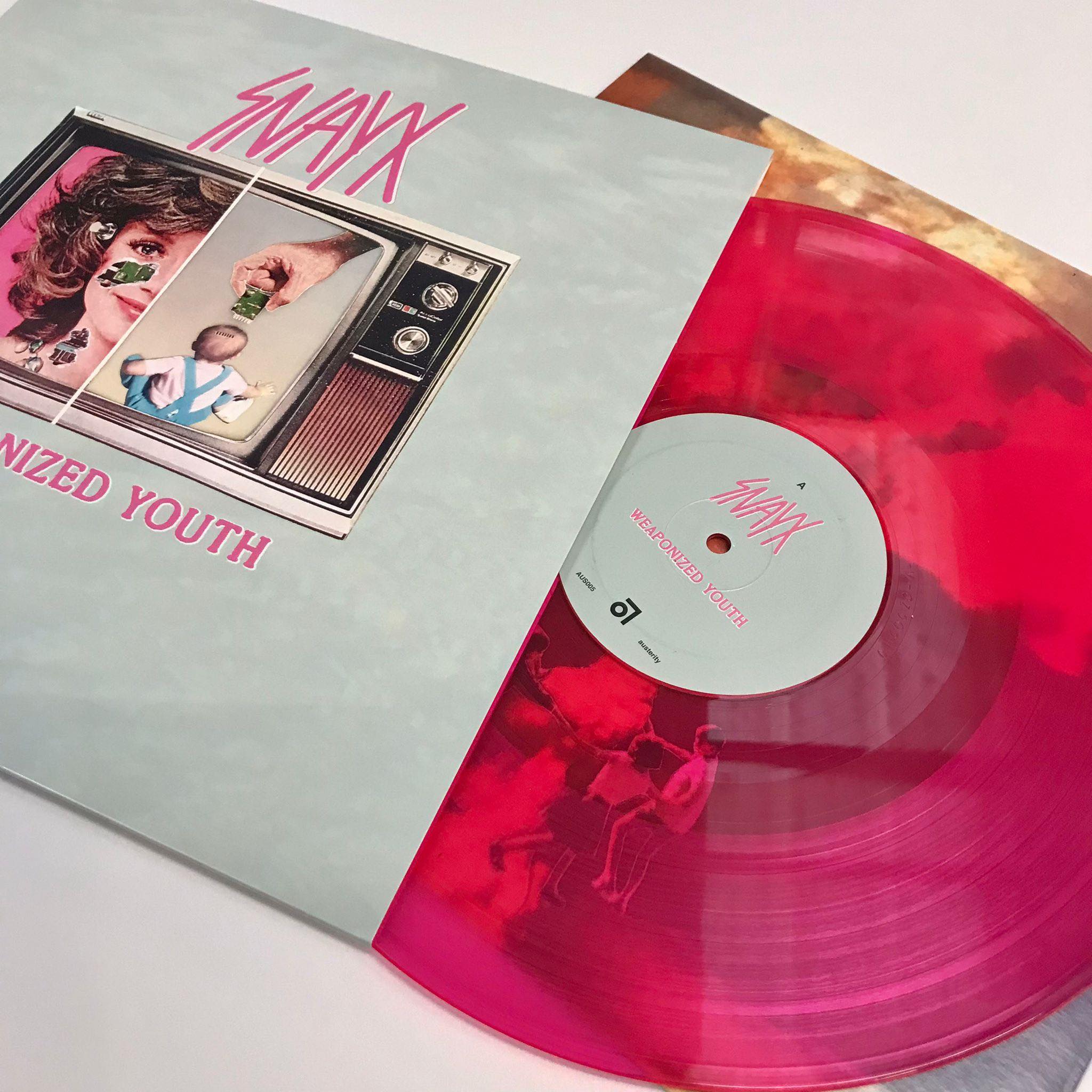 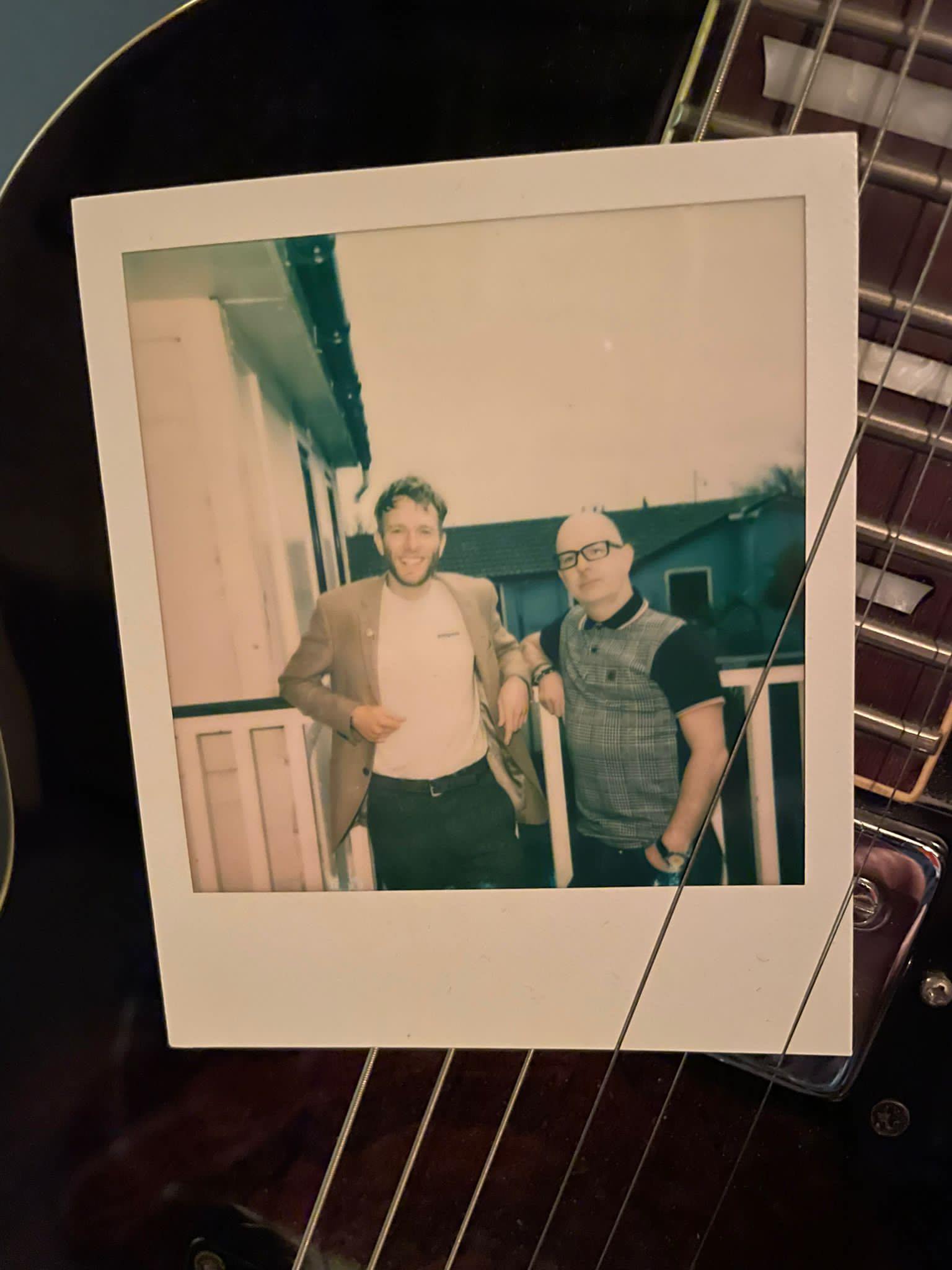 On behalf of Jim, Gaz & all of the austerity family, we'd like to thank you all for the continued support over the past year. It's been a blast!

But, trust us when we say that we're gonna take 2023 to a whole different level.

Enjoy your New Year's Eve, & remember - no matter what happens - not the hootenanny. 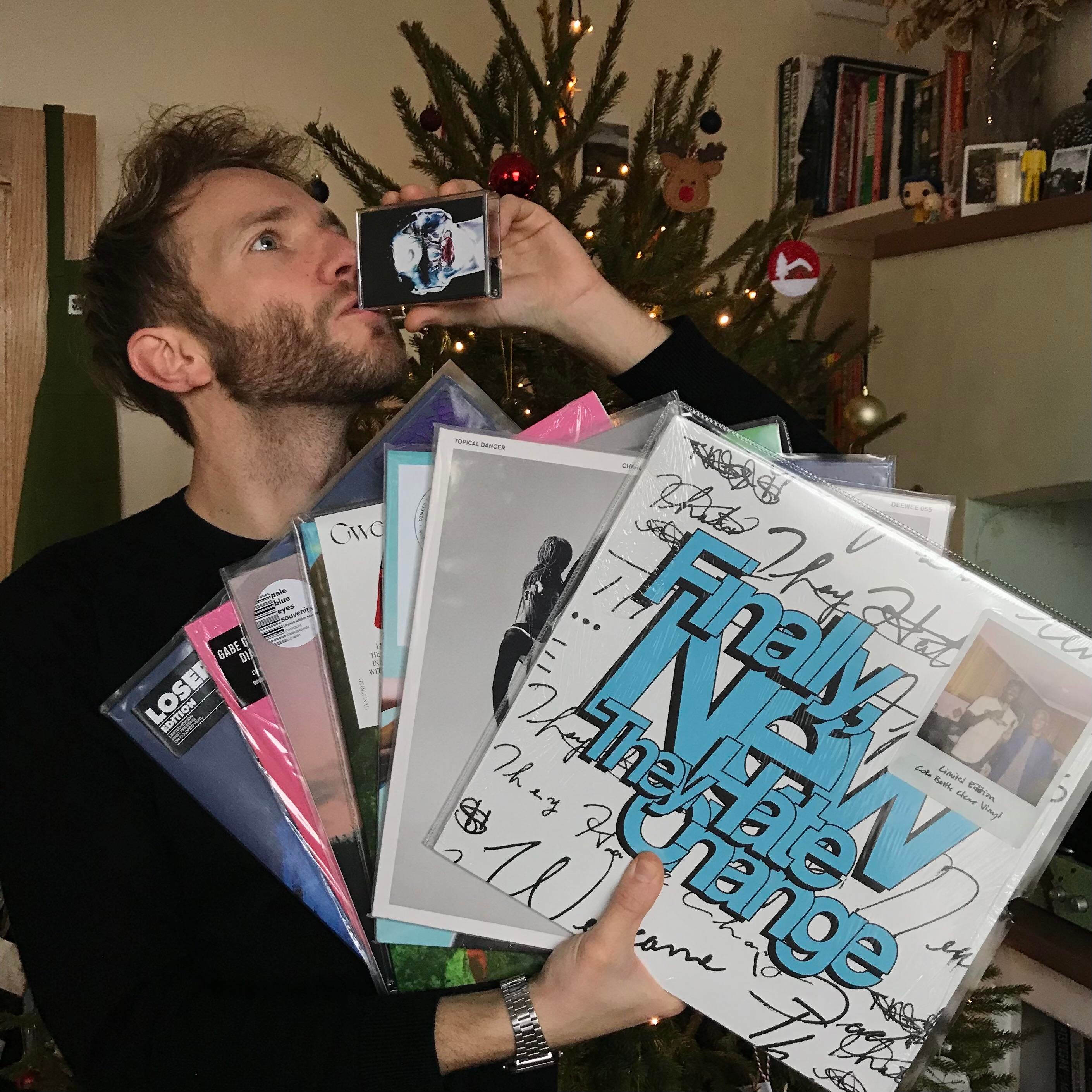 From the dry, cool wit of Charlotte Adigery to the brooding pulse of Gabe Gurnsey. The refreshing burst of slick hip-hop & unimpaired production from They Hate Change to the vehemently executed filth-meets-beauty of the lairy PVA debut LP.

2022 has been one of the most exciting & sublime years of music in a long time, making our choosing of the annual AUS end of year honours list a pretty challenging task.

However! We persevered - & you can check it out in no particular order below... 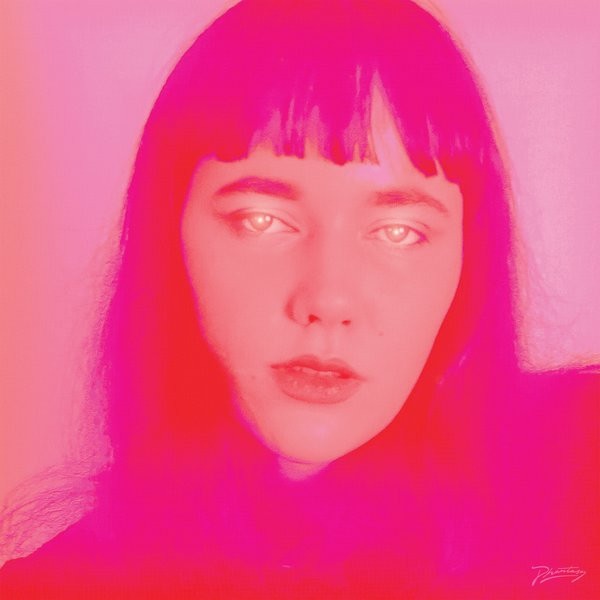 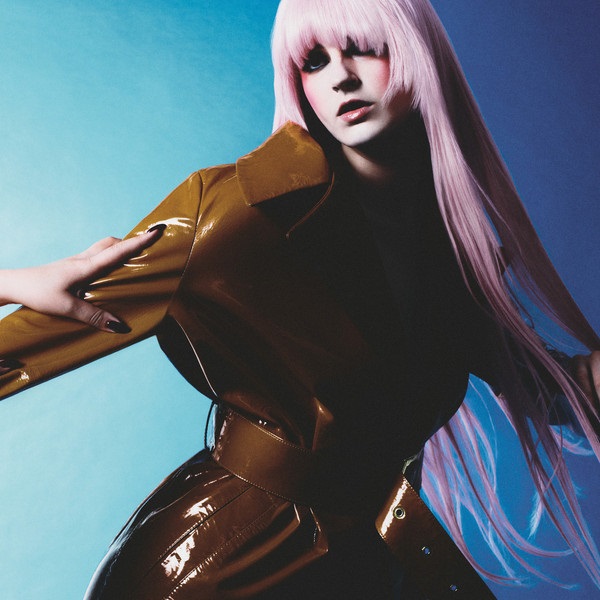 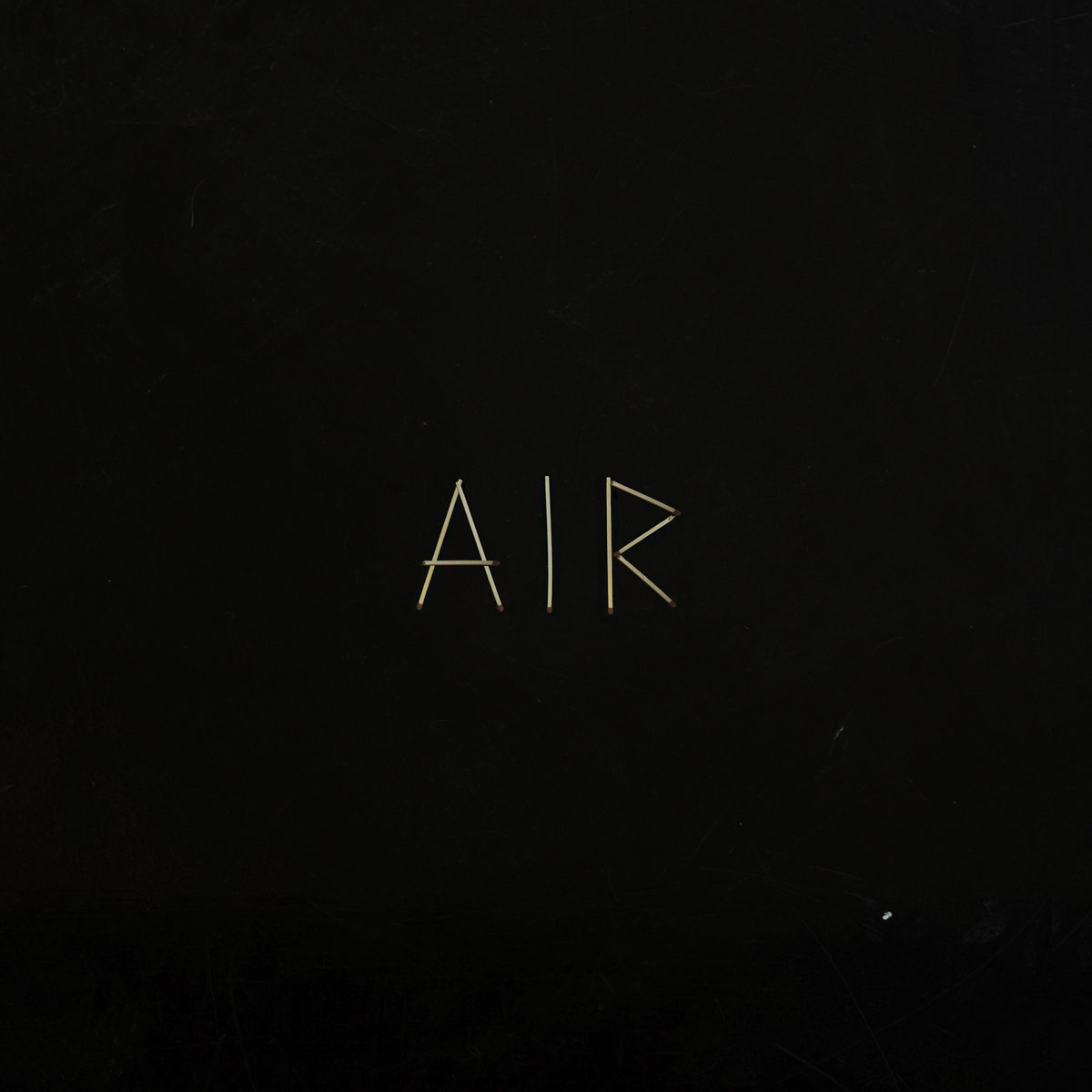 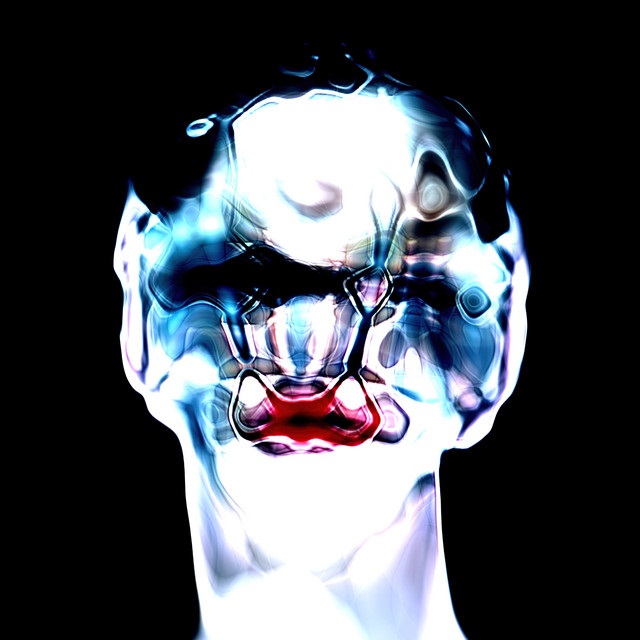 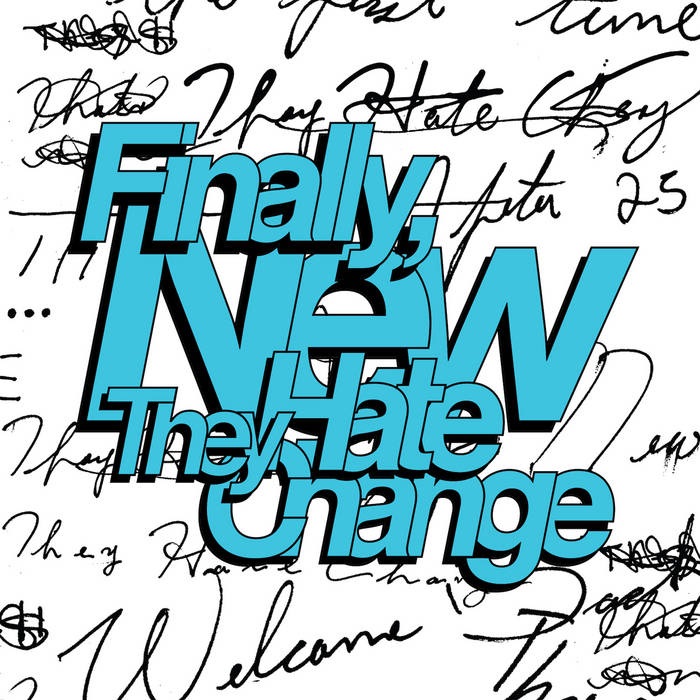 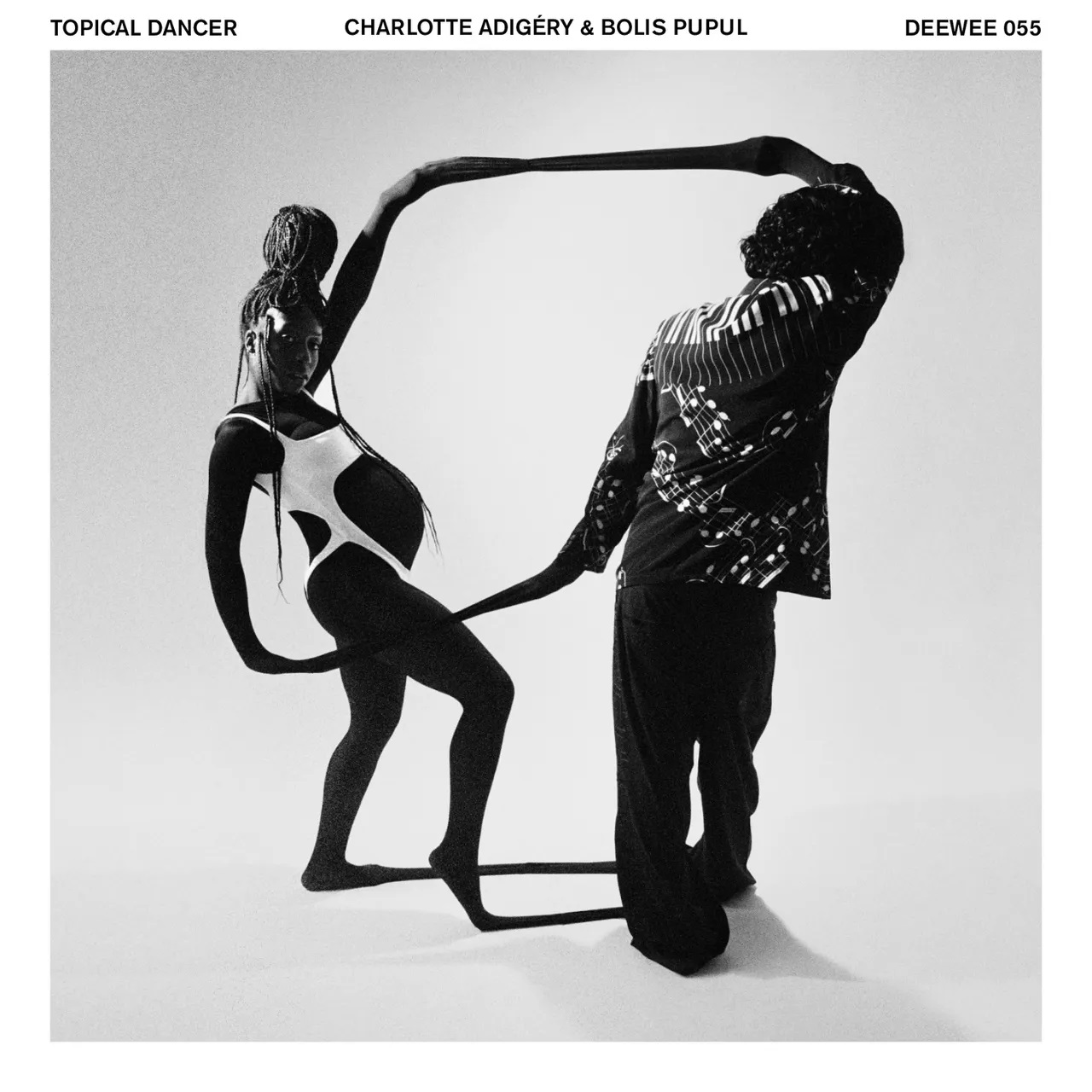 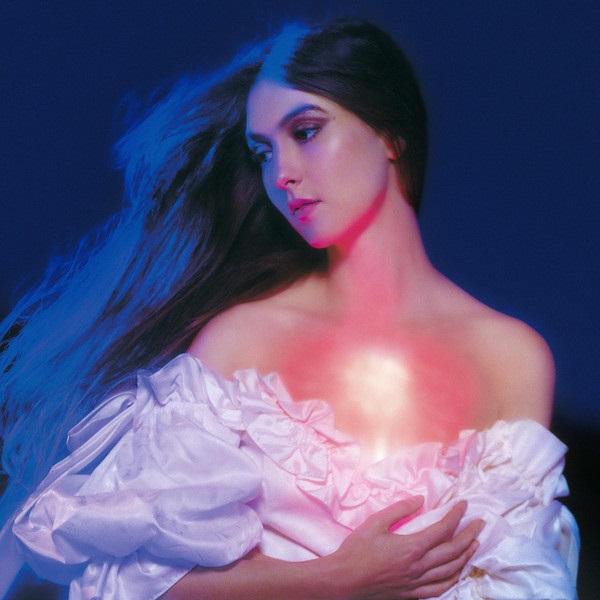 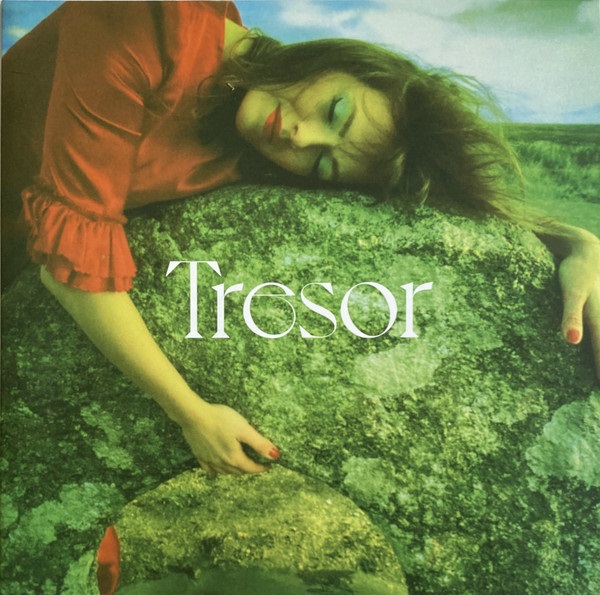 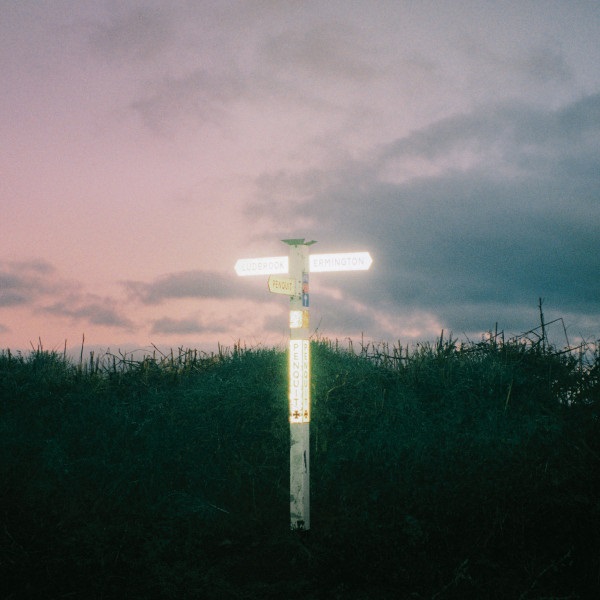 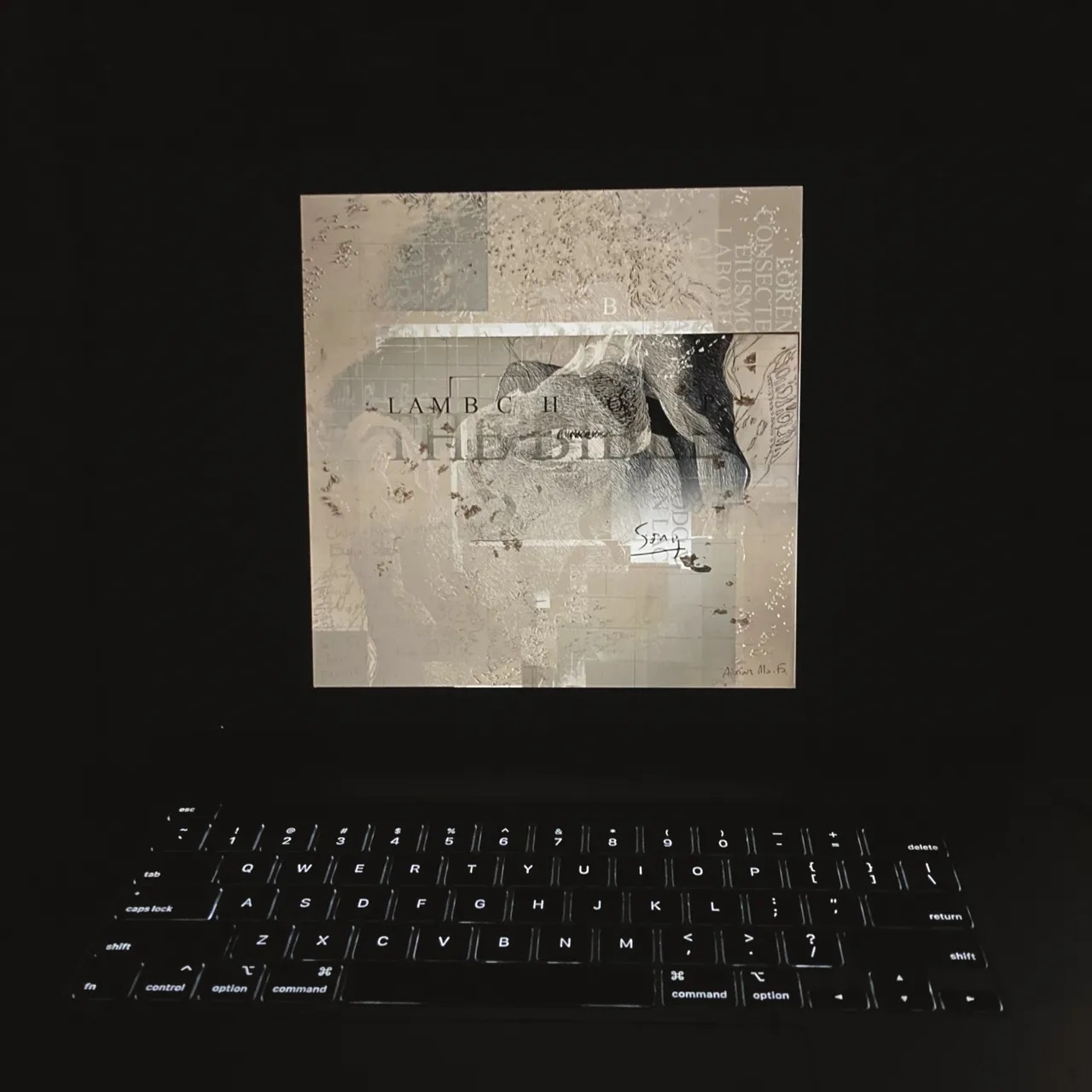 Reissue of the Year:

Gigs of the Year: 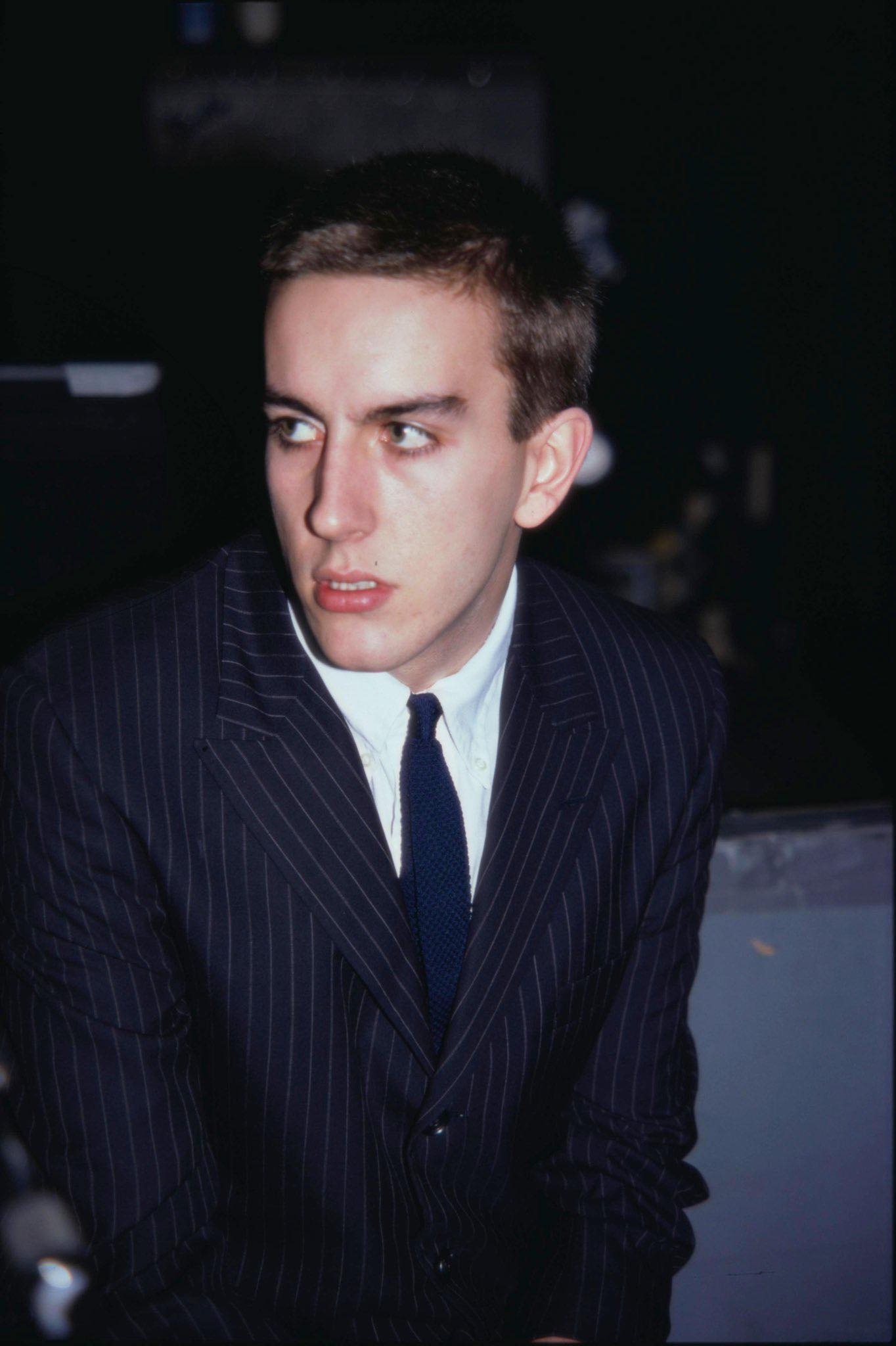 austerity records would like to send our condolences to the family, friends & fans (which very much includes us) of Terry Hall, who passed away yesterday at the age of 63.

An incredibly influential voice of a generation that was trying to find its place in the world & fight back against the prejudices it found in front of it. Another pioneer gone way too soon.

Keep on fighting til' you're dead. 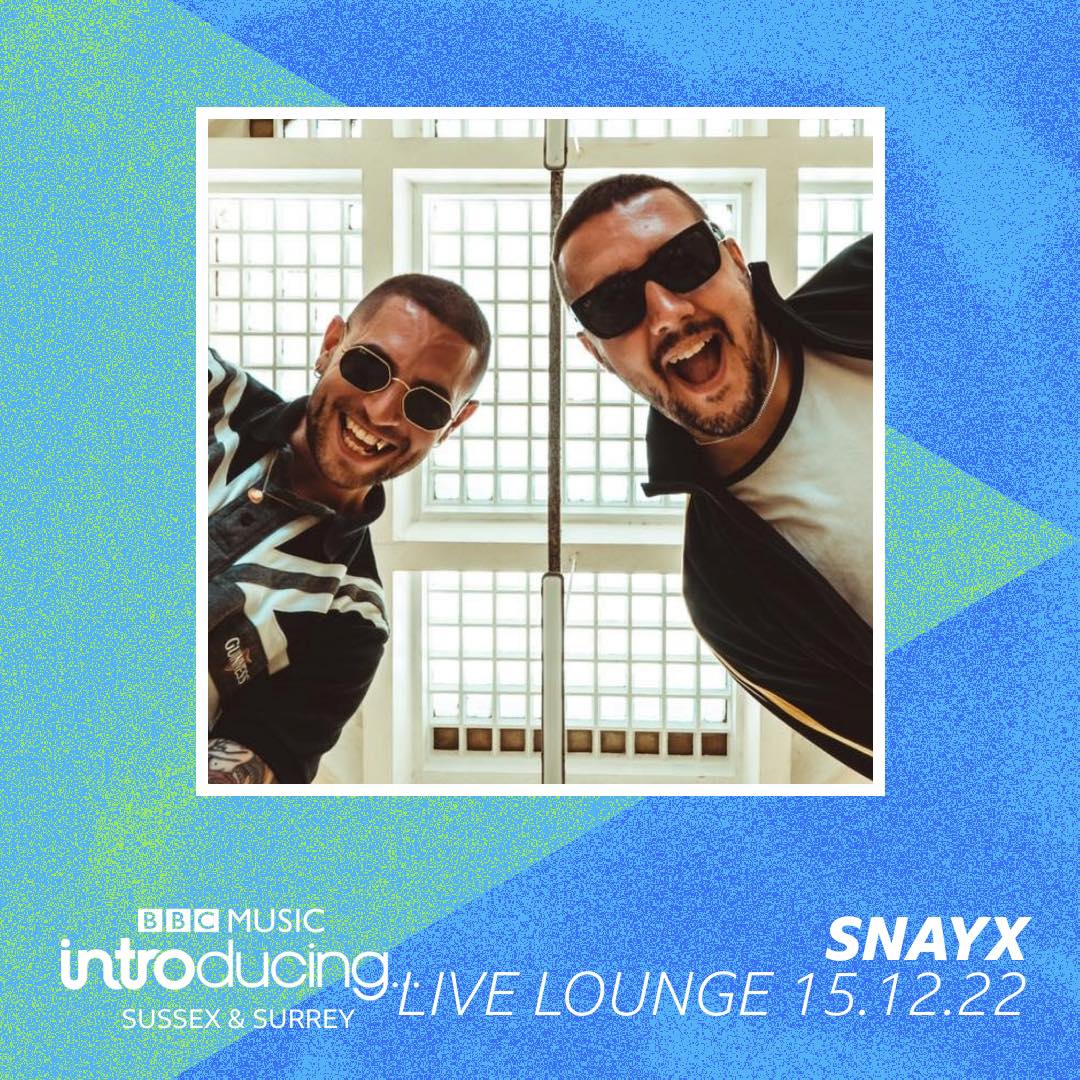 The crew at BBC Music Introducing have just announced that our very own SNAYX will be the special guests on the last Live Lounge of 2022!

The lads will be joining radio legend Melita Dennett this evening (15/12) from 8-10pm.